I’m going to try to keep this short…because if I dont get this up before Twin Cities Marathon it might never happen…but as some of you Facebook peeps know, I attended a 24 hour race on Saturday.

If I die tomorrow, I hope I’ve done enough good in the world to have this be where I end up. It’s def my idea of heaven. Except I’d fill the field with Loopsters and my other cool runner friends. And Ryan Gosling clones (who’d run shirtless).

Loopster ErinB ran this race last year so it was on my radar…but then a Maniac I met on the course at Afton said it was an awesome event. Event….not a race…and she convinced me I had to do it. Unfortunately, by the time I got home from Afton, it was full 😦

BUT there was a volunteer option. Volunteer for 4 hours and you get to run! I emailed the RD who basically said he’d give me a spot if I promised to show up but I wasn’t showing up on volunteer lists or on the list of runners online. A 50K was on my double marathon schedule…but did I really want to do 50k the week before the Twin Cities marathon? More importantly, did I want to drive almost 2 hours in one direction only to be told I can’t run?

What’s a girl to do?

Fine, I’ll go. Darnit! ARGGGGG!
I laid in bed for almost an hour debating. Eventually I got up and went** 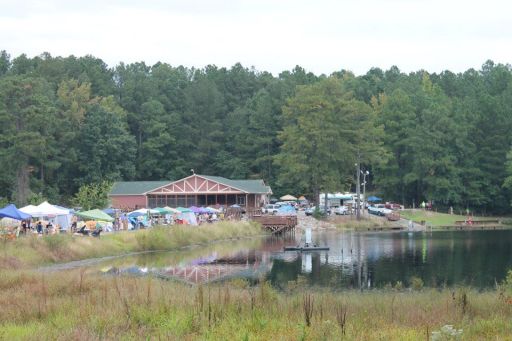 I approached the official looking table and timidly asked if I could run a little and volunteer a little. I held my breath waiting for the response…hoping they wouldn’t say, “Who the eff are you? GO AWAY!” Quite the opposite, they said, “Sure, you wanna run first?,” gave me a  bib and introduced me to my lap counter.
It was that easy.

I made it a whole quarter mile into my run before I heard “Jen?”

Such a pleasure seeing her. We live in the same city and I haven’t seen her since Shamrock! We ran/walked a bunch of laps together and the miles flew by. The atmosphere was amazing. People were running by us dancing to music, people running with dogs, people walking laps with their kids, some people didn’t look like they’d ever done a 5k.

We look so serious….

It was too much fun! I knocked out 21 miles before I had to start my volunteer shift. NCathlete went on to have a killer day….hopefully she blogs about it.

I made PB&J for about an hour.

No idea my pic is being taken….I swear I smile a lot normally!

I counted laps for another 3 hours. Lemme tell you, it’s actually harder than you think…some people would blow by you…other people had quit/taken a break and were just walking to tent from bathroom. Some people tried to argue that I missed a lap. When the squillion boxes of pizza came the area was like a wasps nest.

Despite the amount of mental stamina it required, I really enjoyed counting laps. Seeing people realize they just did their first marathon or 50k was pretty awesome….esp people who obviously doubted themselves. There was a 9 year old kid who had done 50k last year, who was ecstatic when he realized he beat that before dark this year (I think I heard he did 44 miles that day). There was the guy who, upon hearing there was a tornado warning in the area, took off claiming everyone had to run faster so the the wind generated by our centripetal force would kept the storm away (it worked …no storm!).

It was almost like runners came by to entertain us…

Volunteering gave me a chance to see the classic group of laid back ultra runners in a very different setting. People seemed to unwind in front of us before going out for the next lap. The jokes, dancing, loving insults were top notch. It was like a Thanksgiving dinner I imagine people who come from big families have…

Finally 8pm hit and I was fee to run for the next 12 hours if I wanted to.

I’ve never ran a race in the dark before. Luckily I thought ahead and took my headlamp. NCathlete also gave me her extra Gatorade before she left so I had everything needed to run an additional 10 miles.

Trail was marked with glow sticks. This was the sign that marked the “big hill” of the loop

I’d be lying if I said I wasnt nervous about running 10 after doing 21 and then sitting for 4 hours. The first lap was stiff…and the trail I completed 14 times earlier was completely foreign. But after the first lap,  I was in a groove.

Most people had 40 and 50 miles already with many more to go so they were walking. I felt bad running past them…but I felt great. The highlight? A guy moved to the side saying “I hear the pitter patter of very fast feet.” Me? Fast? Whhhhha??!!

Obviously stole this pic from someone up way too late…but coming into the lap counting area was pretty much like this after dark….

The loop, which was fairly flat..only a few slight incline/declines…felt entirely downhill. I know that’s inconceivable (!!)….but I couldn’t see more than 3 feet in front of me so my eyes couldn’t tell me differently. I kept saying, I’ll just run this lap and walk the next. Nah, this feels good so I’ll walk the next. I said it again and again…and before I knew it I was at 50k.  So I ran another lap.

I was so tempted to keep going.  Even the volunteers were asking why I was quitting because I looked too good. Surely I could do one more? One more lap would put me at 35 miles. I could walk it…who cares? I could prob do 2 more after that and get 38 miles. But then I’d be almost at 40…NO!!!!! Gotta quit. It was a trap I was scared to fall into…so I quit at still feelin good at 22 laps. 33 and a half miles. A distance PR!

The next day I felt ok enough to get in another 6…to pull my week to 60.1. Sept closed at 144.1. Three distance PRs…the week before Twin Cities. Dumb? Probably. But I’m keeping my TCM goals the same:

That’s it for now folks….those of you not coming to TCM, I’m sorry. I’ll have a beer for you. Those that are…Are you ready for a friggin awesome time????? See you guys Friday!

**I cannot believe I almost skipped this race. Lemme just say that there is nothing, not even another Loopfest the same weekend, that will keep me from this race next year. I seriously encourage everyone to come join me….you wont regret it 🙂