For the last 4 years I’ve maintained a healthy trend of having a Spring and a Fall PR. Even if the PR is 20 seconds like in Spring 2013…a PR is a PR. I figured this fall would be the exception because I hadn’t really done much in terms of training. In fact, I’d been a complete jerk with the fall schedule:

So…basically within a month of Marshall, I had 135 race miles. No speedwork. No tempos. No PR in the cards 😦 However, if I was going to have a fall PR, this was my shot.

It was a rainy, gloomy drive to West Virginia…but when I pulled up the the Sas house it was all a distant memory. Carissa, Angie, and Lisa were already chilling and when Abby finally got there we headed to Packet Pickup.

Compared the 2012 and 2013, this year’s packet pickup was a huge! It’s crazy how much this race has grown and they seem to do a better job every year. The rest of our group was easy to spot and we tried not to freeze our butts off for the group photo before heading to dinner 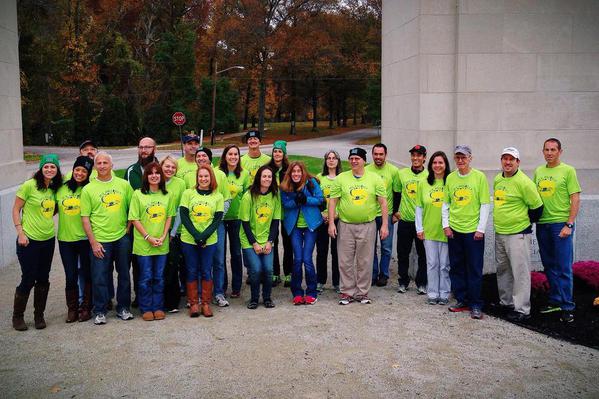 Race morning was cold and I had to laugh that Abby was in long sleeves and carpris while I was in a tank and shorts. I reluctantly handed Sas my sweatshirt before making my way to the start. I was freezing!!!! But I had faith that I knew what I was doing (it was my 49th Marathon/Ultra, after all).

I quickly found the 4:30 pacer, Addison,  and asked him what his plan was – even splits? Bank a little in the beginning? He said even splits so I decided to run with him through 10 and then try to speed it up. My nearly impossible PR was carefully crafted around a negative split strategy. It’s worked for me so many times I figured it was the only thing that would get me there. Sub 4:27:30 or no beer!

The first 3 miles were crowded and ended up being a little slow but somehow Susan managed to find me around the first mile marker. Running with a pacer is great but running with a Loopster is a super bonus. Given the slow first 5k she and I broke off from the pacer to make up for lost time.

Susan and I hit a really nice groove, running through town past the National Guard Armory (where I got to Hi-5 Steve!), past the guy rockin on the drums and the Sons of Anarchy course monitors, and into Ritter Park.

Pacer Addison caught up, then passed us, but by then Susan and I had more than made up for the lost time and stayed our course. We kept him in our sights and linked back up with him as we exited the park.

Coming back into town was exciting. This year I was too fast (WHHHHAAA???) so I missed seeing the half marathoners on their way back (I would have loved to see Andi on her way to OA female win). Seeing the marathon leaders heading out for their second loop was a real treat. I almost didn’t notice how poor I was feeling at this point. I got a little worried seeing Steve, then Carissa with no sign of Dave, so I told Susan at the split to yell her butt off when she saw him and made the right turn for the full marathon course.

I didn’t feel very confident in a PR.  Nearing the stadium, I was tempted to turn off and just call it at the half. Then I thought about scaling back and just making it a fun run. In the end I woman-ed up and said good-bye to Addison and dug in to get my negative split. His slightly-too-fast first half actually put me in a perfect spot – 2:13:38 to PR. All I had to do was repeat the last 13.1 miles. Easier said than done!

Shortly after the 13.1 mat I passed Caitlin on her way to Manaicland. She looked awesome but she said she didn’t feel so hot. I attempt to sing “Living on a Prayer” to cheer her up (Because, you know, we’re half way there) but I’m sure it came out as a bunch of mumble jumble.

Rounding the stadium, I passed Sas and the rest of the half finishers cheering their drunk butts off. I was so jealous!!! Nothing I could do about it though without being a quitter….so I chanted the new mantra: No PR, No Beer.

It kinda sucked being on my own but I didn’t have the added burden of talking. I just concentrated on keeping the pace as close to 10 as possible. Man, did that require A LOT of concentration!!! I was surprisingly holding on though I ended up spacing out a little bit in Ritter park (the trail runner in me wants to just bop along in the woods) . Don’t worry, I locked it back down once I was on the pavement.

Math seemed impossible. I kept trying to figure out what my time was going to be and I kept coming up with random times all over the place. I kept going from, “You can run 11s from here and still PR” to “Girl, you’re gonna have to 9s if you want beer later.”

I didn’t feel better about being able to drink post race beer until I hit the Marshall Campus. That’s when I figured out I could get sub 4:25 if I REALLY pushed it. Go, go gadget legs!!

It was literally 5k pace for me. Flying past the Loop cheer squad gave me such a rush I’m pretty sure it’s the fastest pace my Garmin’s ever registered, down the steep decent into the stadium, catch the football, drop the football….I wanted to say Eff your football but the volunteer scrambled so hard to get me another I grabbed it. Come on Jenster. Move your bloomin a$$!!! 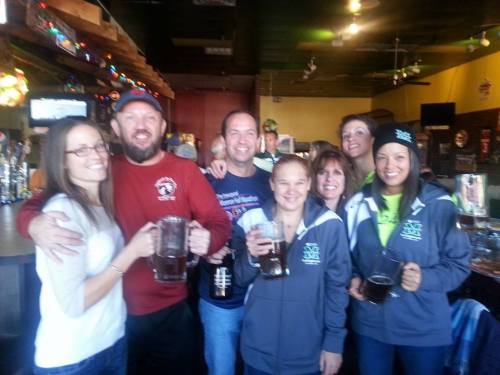