I started to write this report 1,000 times and I scrapped it every time because words couldn’t do the experience justice. They still can’t…but with so many friends heading to Bandera this year the race I keep looking back on my experience and writing this and looking at pics helps me contain my jealousy.

On Thursday, January 9, 2014 a majority of The Rocky Raccoon 2013 crew arrived in Austin. We drank with Jackaloupes and ate at Chuys (where rumor has it a famous proposal occurred). The next day we stopped to see SRV before heading down to San Antonio to see the fabulous Mo Sheppo and view some Giant Koi and not-so-giant cannons. 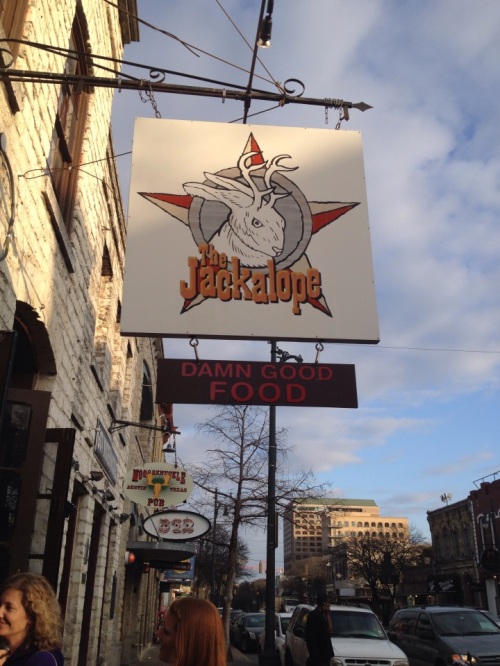 After some questionable looks from Texas Rangers (Mo is a pro at evading the law), I got my prize for a year of ridiculousness….the Year of the Jenster Mug. I never saved a copy of all the things I did to deserve this mug, but long time readers should know the jist and are very jealous!

After all that excitement it was time to head to Bandera to pick up our race packets!!! The Texas hill country was a short drive from San Antonio and it was freakin gorgeous! I wonder how Savage ever left.

Tejas Trails packet pick up was quick and efficient.  I didn’t end up at the Trouble Table like I did at Rocky Raccoon (which is a good sign….the two times I’ve had a missing bib at packet pick up I’ve had horrible runs) and snagged a shirt that actually fit me. 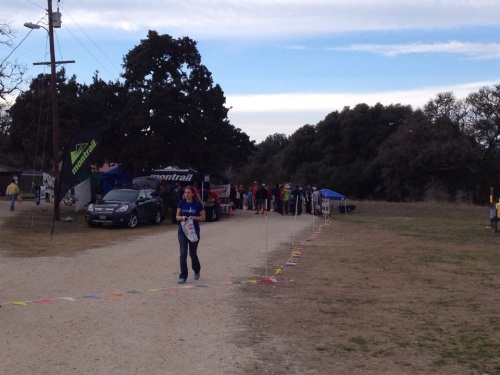 The 30 mile ride back to the hotel felt like I took forever…I tried not to think about how I’d be basically running twice that by that time the next day. We found better ways to occupy our minds – like laying out the flat girls, painting our nails with glow-in-the dark paint, and popping bubble wrap to imitate the sound of tiny cannons. 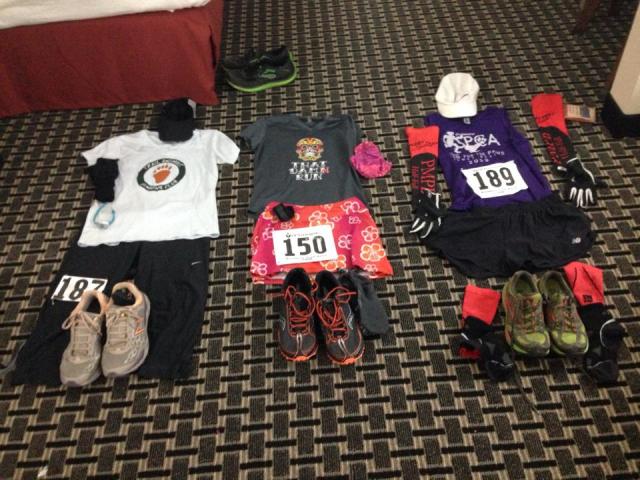 Race morning was pretty much a blur…Just like the pic below. There were some hugs and some good lucks (Though we all know I needed to luck way more than the other trail broads!)

I spent the first few miles freakin out. Really, Jen….100k? Really? Attempting that distance is really freakin intimidating (and I think it always will be, no matter how many times I put up 50M or more). I kept looking around at the people near me in the conga line and thinking I didn’t belong. And then, as if the trail gods could hear my freak out and wanted to shut me the eff up, a trail monkey popped up right in front of me. 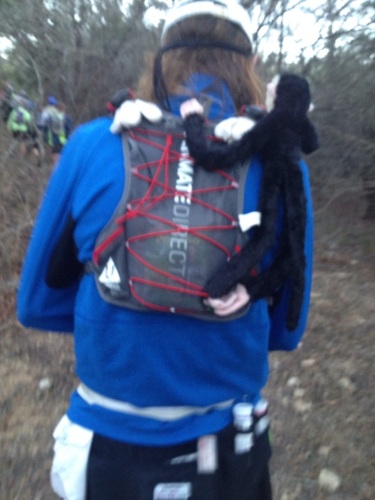 It was the sign I needed. Suck it up because it’s a damn fine day to be running. And if I’m lucky, and if I’m lucky enough to run a few miles directly behind a life sized trail monkey then I’m pretty gosh darn lucky,…I get to run into the night and see my nails glow in the dark.

From what I remember (almost a year later) the climbs in the first 4 miles of the 50k loop were the toughest but the view was just breathtaking.

After about 4 miles there was a steep downhill into the Nachos Aid Station, which had music and the party atmosphere you need from an ultra aid station. Also, if the trail monkey wasn’t a good enough sign, they had a sign that was more than good enough. These words stayed with me the rest of the race.

After Nachos the trail leveled off a bit. There was a bit of gain and loss but nothing like the first section. It also seemed a bit less rocky.

Leaving the Chapas Aid Station I met a man in his 60s named Sergio…who told me stories that made me forget the fact that I was in the middle of my first 100k and was just on some other run. He told me the secret to eternal youth was to act immature. So much learnin up on the trail!

I hit the Crossroads #1 Aid Station (16.9 miles) right around 4 hours. My buddy said it’s typically double the time to CR1 to get back to the start. Eight hours for the first 50k? Considering my goal was to survive the entire race in 20 hours I was pretty happy.

Between Crossroads #1 and #2 is an almost 5 mile rocky loop. This section has the hills called the Three Sisters. I only remember 2 climbs but it was also getting really hot and, with almost no shade, I was getting a bit delirious.

The section heading out of Crossroads, from what I remember, was pretty flat and shady. The only thing that really sticks out about this section was seeing a lady on a horse who said “Almost there.” She obviously has a different definition of “Almost” and “There” than I do because I had 40 freakin miles to go before I got to my “there” and 40 miles, even in a car, doesn’t count as “almost.” Get off your high horse lady!!!

Coming into Last Chance Aid Station (26 miles) I caught up to some 50kers. Olga King….THE Olga King was telling them to head straight and it was about a mile to the finish. Me? I had to turn right because I had 5 miles. I must have made a whiny face because she told me to beat it. In case you didn’t know, when an ultra legend (and alpaca hat knitter) tells you beat it in her awesome Russian accent, you beat it. 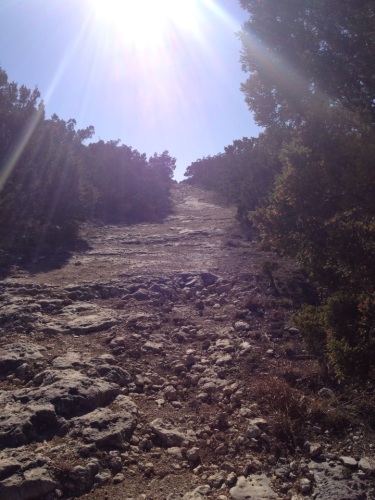 The section back to the start was similar to the first 5 miles. Rocky and hilly. The difference was the complete lack of trail monkeys and conga lines. Nope, all alone. 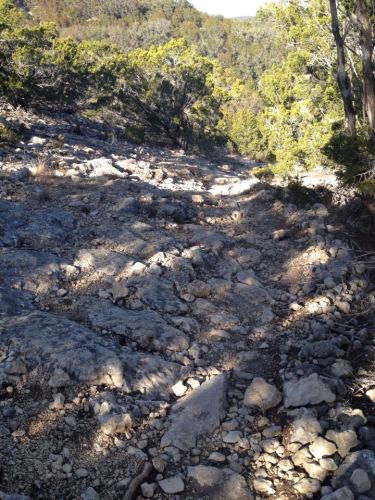 Sergio totally called it. I finished 50k right at 8 hours. Kynan was there ready to spring into action, bypassing the story of his awesome comeback race to tell me that the other Broads were lookin fabo. He asked how I was feeling…and I still remember the wave of awesomeness that washed over me when it really sunk in – I felt exactly how I wanted to feel.

As I finished grabbing my stuff, the 100k winner came in. GDSB. No worries though, I had ground to cover before dark. Heading out for the next loop, a guy and woman caught up to me. I had seen them earlier on the trail and had leaped frogged a bit. They, Erik and Janis, were strong and consistent….and they were Bandera vets. I immediately clicked with them and they were really excited to learn it was my first 100k and first Bandera. 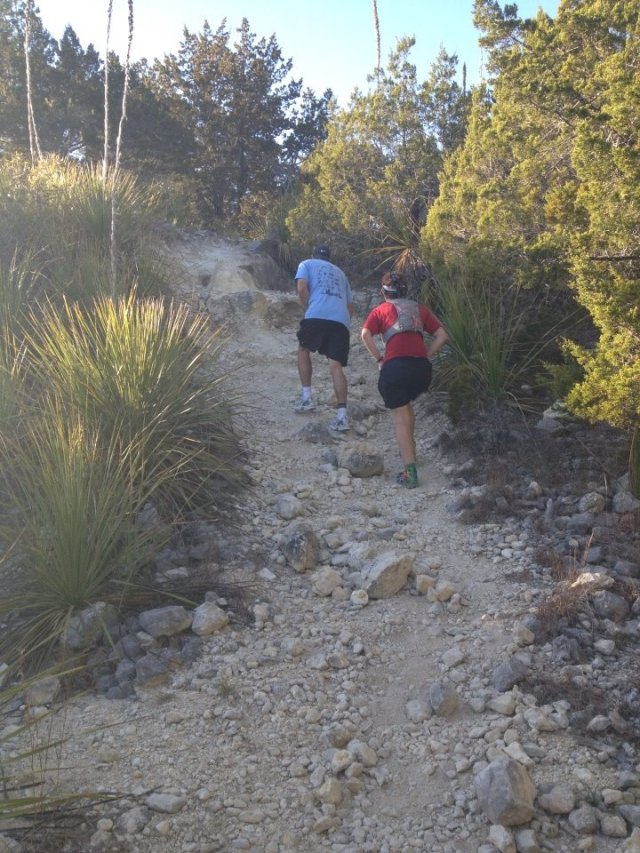 Both of them had their headlamps in their drop bags at Champas so it was a bit of a race to make it there before dark. They kept me moving when I wanted to walk…and even when they walked I had to jog to keep up. We had a fun time and were making even better time.

We got to Crossroads a little over 12.5 hours. I mentioned to my new friends what Sergio had told me. They said to add a little more time for the dark but that was about right. They said it typically takes them 1.5 hours longer to do the second loop than the first. I was giddy thinking about the possibility of a sub 18 finish.

Even though I still only counted 2 sisters…the loop back to Crossroads was my favorite. Since there was little tree cover, you could see the headlamps bopping along like little Christmas lights. And the stars. OMG the stars. Erik was a science teacher and he pointed out the constellations. I still cant get over how pretty they were. Throw in the coyotes howling in the distance and the pockets of warm followed by cool air and you had the best night Texas had to offer. Bonus: My nails were glowing!

I dont remember much about the trip back to Last Chance, but I do remember Erik taking a shot of whiskey when we got there. I passed on the booze because I was drunk off the thought of 5 miles left.

Those 5 miles felt more technical in the dark. I was grateful for my gloves because I found myself crab walking down some of the steeper sections. My friends would get ahead on these sections but they would call out to make sure I was ok. Luckily I was still moving well and was able to catch back up on the less technical sections. I seriously got super lucky…One: I was able to find them. Two: they wanted my company. Three: I was physically able to keep up with them. Life is pretty amazing sometimes.

It was almost like getting to the end of a good book. I wanted to be done yet I wanted to savor it. Never in my wildest dreams did I imagine finishing my first 100k feeling so great the entire time. 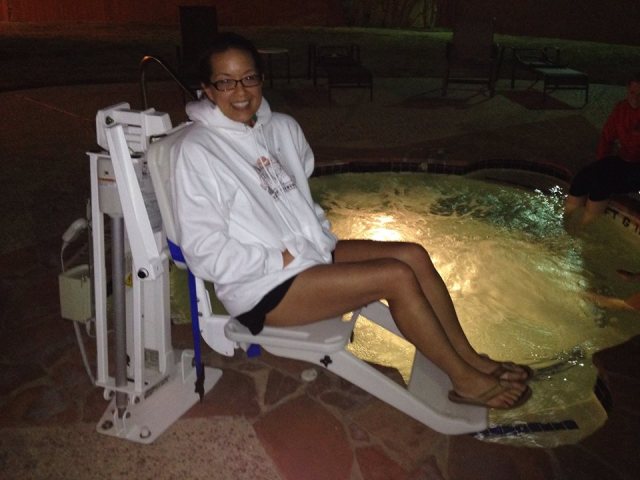 The next day was a blur of beer, burgers, belts, and recovery. It turned out EVERYONE in the crew had a great race and we were all covered in that awesome race glow….happiness and friendship overflowing…until Monday when it was time to say good-bye 😦 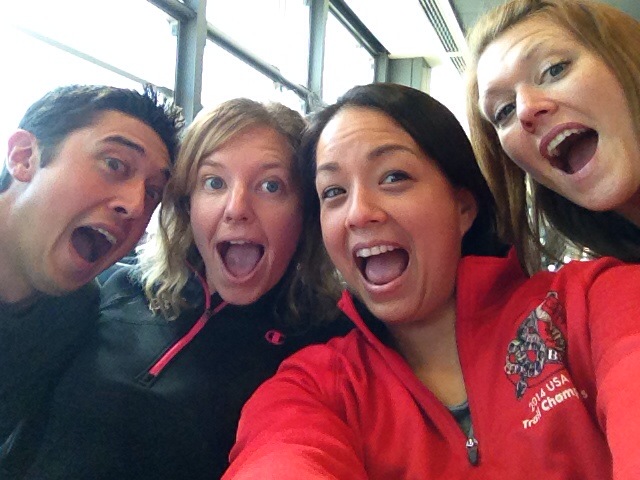 So, good luck to my friends heading to Bandera this weekend. If you have a fraction of the fun I had at this race, you’re in for a treat. I’m so jealous!!!!