For the FOURTH year in a row, I get to use the same title. I LOVE THIS RACE!

If I die tomorrow, I hope I’ve done enough good in the world to have this be where I end up. It’s def my idea of heaven. Except I’d fill the field with Loopsters and my other cool runner friends. And Ryan Gosling clones (who’d run shirtless).

I still feel the same. This race is my own little slice of heaven. I don’t even really need the exception anymore, although I’d love to have some Loopsters join me, because this race is more like a family reunion. Almost all my fav local ultra runners, camping…FOOD. Who could ask for anything more? Oh, distance PRs! Yes, let’s ask for that…every year.

I’ve been in hardcore training mode all summer. Hardcore for me, anyway, and I set my sights on 100 miles. I knew it’d be tight, esp with the forecast: 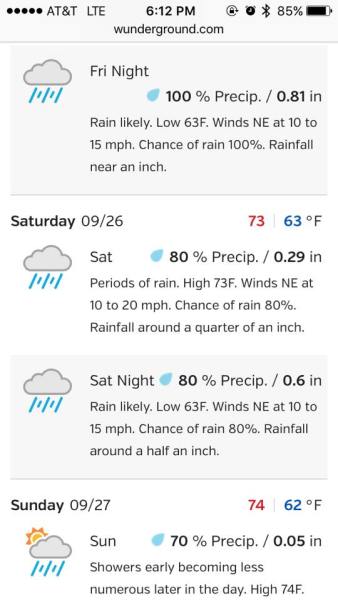 UGH! I had volunteered for two races the previous weekend. WTF, race karma!?!

It rained throughout the drive down, but cleared just long enough to get everything set up. Totally worth the vacation day to get down early and get a good spot.

The rest of the day was spent hanging out with friends, including Gustav the Trail Running Piñata.

The rain was coming down pretty hard come nightfall. The wind picked up too, blowing away anything not staked down well, including a few tents and canopies. My tent had definitely shifted overnight but other than that I made it out of the storm without an issue. Would I be that lucky Saturday night?

The day started with a light drizzle that eventually turned to light rain before subsiding. The guy in the back with the umbrella hat and the windshield wiper glasses had the right idea.

I made really poor choices early on – wrong shoes and wrong socks for the wet conditions. You’d think running on a 1.5 mile loop where I’d have access to fix all that many times would mean I’d do that. Nope. I kept telling myself “wait till you hit a marathon before changing shoes.”

By the time I switched I had angry blisters, which would definitely come back to haunt me. Despite feeling much better in dry shoes and socks, the first few miles burned as my moleskined feet got used to the new shoes. The pain eventually subsided. and I started to get a bit cocky as I hit my goals.

With the 100k brought another much needed wardrobe change. I had a lot of clothes in my tent, but like the shoes I kept telling myself to save it for a 100k treat.

The chafing from 13 hours or wet clothes was pretty nasty. I changed into new shorts only to stop and change into capris a few miles later. It was too warm for capris but I was oozing for places that shouldn’t ooze.

Despite the wardrobe malfunctions I still managed to hit 75 miles around 12:45 am, which allowed a cushy 7.25 hour marathon to finish out the night.  I consider everything before midnight the day, and relatively speaking I had a VERY good day.

The night was a different story. The rain picked up sometime after 10 pm. Headlamps in the rain are no fun. People started dropping out. It was lonely. And my blistered feet hurt so badly it hurt to run on them.

Only I had to “run” on them because walking made me sleepy. It was frustrating knowing that I was moving so well other than my blistered feet and a bit of chafing. It was even more frustrating knowing that I was a moron. I stopped a few more times through the night to change socks, and tried to change shoes again but my feet were so swollen they wouldn’t fit inside the a different shoe. Eventually I had trouble squeezing into the old shoe so I resolved to spend the rest of the race in wet socks. It was just too painful taking the shoes on and off.

Around 3 am I decided to take a quick nap in a wet camping chair just off the trail. The 5 min cap naps seemed to work, but were definitely noticeable on my splits. After the 3rd or 4th mini nap I decided to take a longer one, but I was only about 10 min in when a sleepy runner decided he wanted to sit there. I know him and the girl who yanked me out of the chair before he sat on me, so I was able to laugh it off since it got me moving again. If he hadn’t tried to sit on me, I prob would have stayed there will sunrise.

It was still raining and I was moving slow. So slow that I knew 10 miles in 2 hours was impossible, which made me want to give up. However, I was third female due to all the drops. Fourth female was consistently a lap behind me and it didn’t seem like she was giving up.

Finally the sky began to lighten and the horrible haze of the dark, rainy night subsided. Everything still hurt and I really wanted to just finish in flip flops, but I knew 4th female would catch me if I stopped.

When you go out on your last lap, you’re handed a banana with your bib # written on it. At 8 am they sound the horn and you drop your banana. I took my banana and walked really slowly, convinced the horn was going to sound before I made any progress. Soon I was close to the half way point so I started to run…knowing I’d have to finish the lap anyway. I really wish I had started running sooner.

Best of all, I finally won Team Buttercup’s (as in suck it up, buttercup!) Classy Woman shirt…and it doesn’t get any better than that. 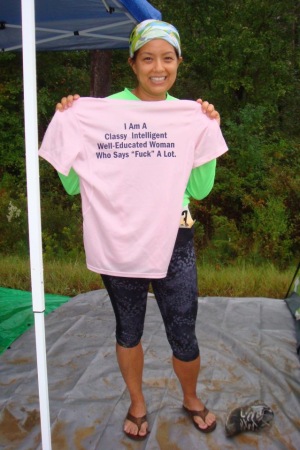 I love 24 hours races and specifically this one. Anyone want to come with me next year? I promise not to make you pack up all the stuff 🙂