Being a pacer sounds pretty perfect for a race-a-holic like me. I’ve always wanted to pace a marathon, but it always seemed like something only Ms Ritz or someone who knew everyone who’s anyone in the running world would get to do.

Well, just call me Mrs Jefferson because I’m movin on up!!

…or I’m just on Facebook too much because when the uber cool T-Rex runner (read her blog, she’s effing hilarious) posted on the Maniacs page that Columbia needed pacers – slow pacers, I jumped. Columbia is only 3.5 hours away and the race was the weekend before Shamrock, which to normal people isn’t a pro but I have a history of PR’ing after a slow super long run (by history, I mean it happened that one time I ran 33.66 miles at a 24 hour race the weekend before a big PR at Twin Cities).

The day before the marathon I took a half day from work and drove to Columbia with relative ease. Packet picket was smooth and so was the check in at the VIP pacer table…everything went so smoothly I was actually early for dinner!

A funny thing happened on the walk from my car to dinner. I was crossing the street behind a guy in a maniacs shirt. I stared at the side of his head for as long as I could without looking creepy…and accessed the enormous database of people I know until I figured out how I knew him. Once I figured it out, I asked a question that the street corner had probably heard at least 5 times that week,

“Excuse me, did I eat watermelon out of the back of your truck at the Rosaryville 50k last July?”

I doubt he recognized me…but he obviously did serve watermelon at that race so I was given street cred.

Maniac dinner was OSOM. I knew of some people but most people were fresh meat. I even got to sit next to my fellow 5:30 Pacer, Murray. 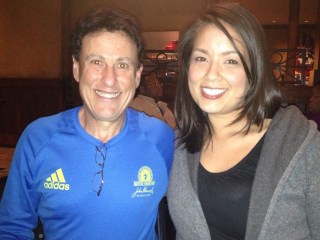 There was also a guy who T-Rex said was going to win the whole freakin race. I assumed it was a hyperbole and he was just another fast dude…but I told him since it was a two loop course he was likely to lap me and Murray so he had to say hi.

Maniacs: These people put my marathon count to shame!

I slept like a champ and arrived at the Capitol Building for the Maniac picture ON TIME… AGAIN!!! Those of you who know me know this is a big deal. I’ve def had friends calling my hotel room race morning telling me to hurry the eff up!

Murray and I, ready for battle

The start was a little scrambled. There was supposed to be a big 5:30 sign for us to hold up so people could find us and see how awesome we were and commit the next 5.5 hours of their lives to our company. But there was no such sign. And everyone I talked to wanted nothing to do with 5:30. Larry, another maniac who was at dinner, was the only taker…and even then his plan was to stay with us as long as possible, then falling back.

With a maniac who reminded me of Senior Runner and Larry

The course was classic rolling hills. Nothing too terrible but enough to make me glad I wasn’t trying for a PR. We tried to keep a steady effort, taking it easy on the up hills and trying to make up time on the downhills. This is actually harder than it sounds….there was a lot of mental math involved!!

Total climb was 1,000 ft…for those keeping track at home

We had a lot of fun the first lap. We picked up and lost people, ran with a bunch of maniacs at certain points, stopped to take pics, and joked around. The morning temps were cool and there were 2 beer stops, one manned by the local hashers and another manned by T-Rex runner, who was recovering from surgery. She put together an amazing trail-race worthy aid station, with gummy bears galore. These aid stations were the highlight of the race course. Of course I had beer whenever I saw it!!

Shortly after the 2nd beer stop as we headed back towards downtown, just before our mile 12, we heard police sirens…and then “Hey Jen!! Hi guys!!” as the dude from last night passed…on his mile 25. He really was winning the race. By a lot.

The last mile of the loop was interesting. There seemed to be some sort of festival on the course. It didn’t bother me because of our pace…and the people there were very aware of us so it actually seemed fun.

Hard to tell marathoners from shoppers

Vendors on both sides…people all around.

We tried to push half marathoners as we passed, and I’d like to think in the last half mile I motivated someone…chip time had us crossing the half at 2:45:16.

Time to do it again!

But first, let’s check back in with Justin, the marathon winner, who stuck close to the chute to give us water bottles and a hug.

No big deal, just shootin the sh!t with the overall winner in the middle of my race

The 2nd loop was a little harder than the first. It was getting hotter (the sun was not our friend) and the hills seemed a little steeper. But Murray, Larry and I still had fun! There might have been some whirling and twirling and jingling the jangoing…

If Murray’s moves weren’t cropped out, I would have bought one of these

I’m not going to go into details…but it was harder to stay at the pace for the second loop. The slower pace started to hurt in weird places and needed to run to stretch out.  I may have pretended to go to the bathroom so I could catch up. I also may have “sprinted ahead” when the beer stops were in sight so I’d have more time with my delicious brewski.

It was also sad hearing people say “Aw, man!” as we passed. Most of us have been there…when A Goal goes to C goal…and then the 5:30 group passes you and you decide “Finish without dying” sounds like a darn good day. We did get some people to pick up the pace and finish ahead of us though. Highlight of the race was def pushing Larry to his best time in almost a year and crossing the line with a first time marathoner…in 5:29:43. Can a 5:30 pacer be more perfect?

Probably…but me and Murray are pretty cool, if you ask me.

Just another Saturday for these people

Post Race @ Flying Saucer. Those who know, know why we came here

This was a great race I def plan on coming to again (Helps that the guy in charge of the pacers asked us back). Hopefully some Loopsters join me for some pre-Shamrock fun in 2014. Speaking of Shamrock…I’ll get that report up soon! Keep holding that breath!